Feast Of St. Mary of the Angels – August 2

Feast of St. Mary of the Angels—August 2 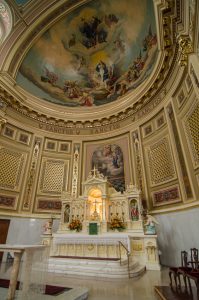 Depicted in the painting behind the main altar is another vision of St. Francis that he had in 1216.

After experiencing a strong carnal temptation one night, St. Francis jumped undressed into a thorny bush outside his cell. As he landed in the bush it sprouted beautiful roses without thorns. Two angels then took him to the little church of St. Mary of the Angels where Christ and the Virgin Mary appeared enveloped in light and sitting on thrones and surrounded by numerous angels. Jesus then asked St. Francis what reward he wanted for his heroic act, to which he answered: “An indulgence for anyone who enters into this chapel, repents and confesses his sins.” As Pope Benedict XVI described:

“Today we are contemplating St Francis of Assisi’s ardent love for the salvation of souls, which every priest must always foster. In fact today is the feast of the ‘Pardon of Assisi, ‘ which St Francis obtained from Pope Honorius III in the year 1216, after having a vision while he was praying in the little church of the Porziuncola. Jesus appeared to him in his glory, with the Virgin Mary on his right and surrounded by many Angels. They asked him to express a wish and Francis implored a ‘full and generous pardon’ for all those who would visit that church who ‘repented and confessed their sins.’ Having received papal approval, the Saint did not wait for any written document but hastened to Assisi and when he reached the Porziuncola announced the good news: ‘Friends, the Lord wants to have us all in Heaven!’ Since then, from noon on 1 August to midnight on the second, it has been possible to obtain, on the usual conditions, a Plenary Indulgence, also for the dead, on visiting a parish church or a Franciscan one” (Angelus Message, August 2, 2009)

In 2016 Pope Francis went to St. Mary of the Angels in Assisi to gain the Porziuncola indulgence on its 800th anniversary in this Jubilee Year of Mercy. There the Pope said:

“Today, dear brothers and sisters, I would like before all else to recall the words that, according to an ancient tradition, Saint Francis spoke in this very place, in the presence of all the townsfolk and bishops: ‘I want to send you all to heaven!’ What finer thing could the Poor Man of Assisi ask for, if not the gift of salvation, eternal life and unending joy, that Jesus won for us by his death and resurrection?

“Besides, what is heaven if not the mystery of love that eternally unites us to God, to contemplate him forever? .… When Saint Francis asked Pope Honorius III to grant an indulgence to all who visited the Porziuncola, he was perhaps thinking of Jesus’ words to the disciples: ‘In my Father’s house are many rooms; if it were not so, would I have told you that I go to prepare a place for you? And when I go and prepare a place for you, I will come again and will take you to myself, that where I am you may be also’ (Jn 14:2-3).

“Forgiveness – pardon – is surely our direct route to that place in heaven. How hard it is to pardon! How much effort it takes for us to forgive others! Let us think about this. Here at the Porziuncola everything speaks to us of pardon! What a great gift the Lord has given us in teaching us to forgive – or at least to try to forgive – and in this way to touch the Father’s mercy!” (Meditation, August 4, 2016).

Our church has a wonderful name and link to mercy, encouraging many souls to take advantage of our full and generous pardon in the Sacrament of Reconciliation, which we offer so abundantly here at St. Mary of the Angels.